It’s always devastating when a pet dog dies. It can take a long time to move on or to get used to life without them.

But it turns out, it isn’t just humans: dogs have the same experience, mourning their fellow animals after they die. That’s what one heartbreaking image shows, where a puppy keeps up an old routine long after his friend passed on.

Caitlin Wynne owned a dog named George. When the dog turned 7, Caitlin decided he could use a friend and adopted a Shih Tzu named Harry.

The two dogs turned out to be a perfect pair.

“They got on really well,” Caitlin told The Dodo. Harry was always more playful and energetic than George, but they’d still play and would always sleep next to each other.” 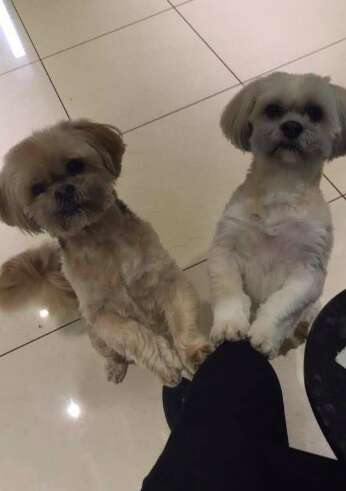 She says that Harry is a very shy dog, but learned to come out of his shell spending time with his older dog brother.

They were so close that they shared a bed, even though Caitlin says they each had their own bed: “They just always wanted to stay together.”

Sadly, George started to become sick when he was 15… but the dogs still stuck together. They still insisted on sleeping together, but now Harry gave his ailing friend some space by sleeping on the side of the bed.

George’s sickness got worse, until it was clear he would need to be put down. Caitlin says it seemed like Harry knew what was happening.

“I slept on the sofa the night before we had George put to sleep to keep him company and Harry was pacing around the room crying,” she told The Dodo. “[He] wouldn’t sleep all night, as if he knew something was wrong.”

But a year after George died, Caitlyn realized how much the elder dog’s death affected Harry.

She noticed that Harry still often sleeps on the side of the doggy bed… just like he did when George was sick. It’s a heartbreaking sight, as if even after all this time the dog is honoring his friend by not sleeping in his space.

“Almost a year on and he clearly still misses George,” Caitlin said. She posted the photos on Twitter, saying that she was “crying,” and now the post has received almost 8,000 retweets.

Many Twitter users shared in her tears, and shared their own stories of dogs mourning their own in a similar way.

“This is so sweet! I lost one of my labradors 4 month back and my two others still leave room for her where she used to lay on the sofa and on their beds. Dogs are so precious!” — Aleisha Moore (@AleishashaMoore)

It’s a sad story, but one that shows how compassionate and emotionally intelligent animals can be, and how they can form real lasting bonds.